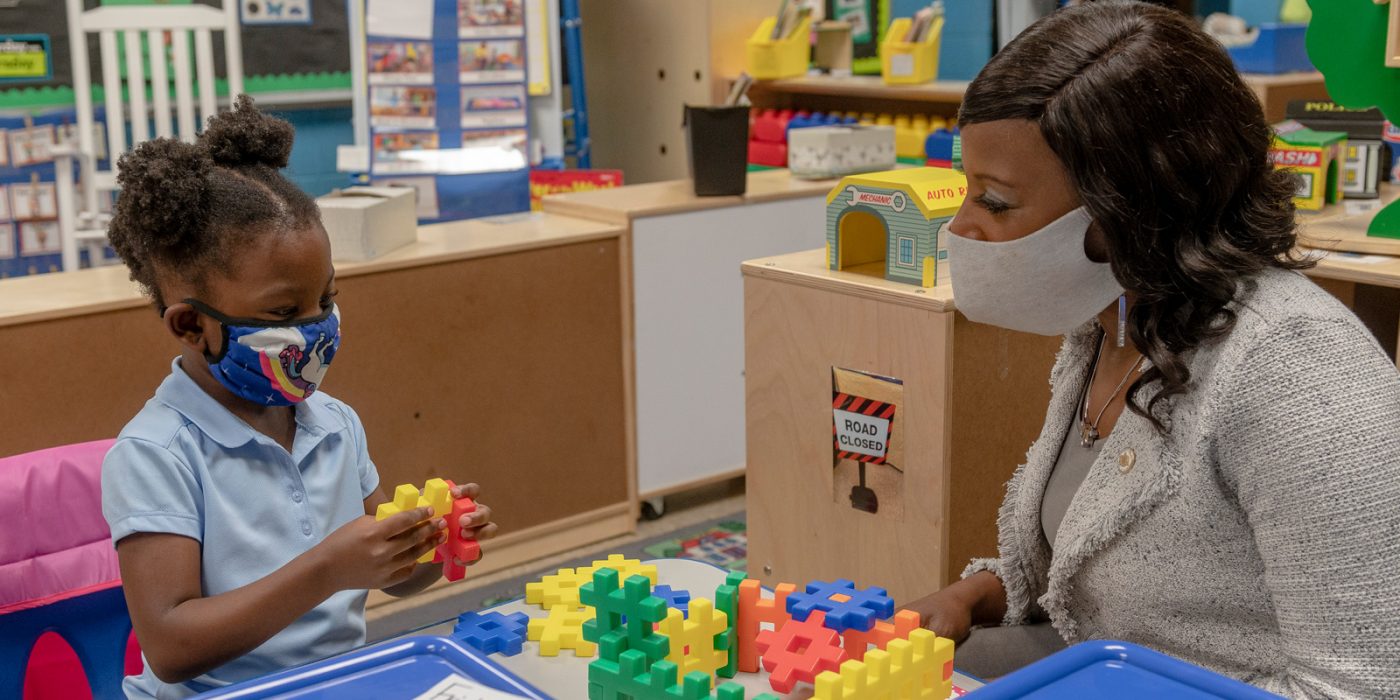 Dr. Barbara Cooper with a student in one of Alabama’s First Class Pre-K classrooms.

When the first wave of the coronavirus pandemic hit this spring, Alabama’s First Class Pre-K turned on a dime to deliver its program virtually. Then, staff immediately began gathering and evaluating data for ways to improve their options for the families of Alabama.

“In March, we started doing outreach surveys to ask parents about the best ways we could support them,” says Dr. Barbara Cooper, Secretary of Alabama’s Department of Early Childhood Education. “We learned that a lot of our parents were really struggling with just being able to connect online,” Cooper says. “A significant part of Alabama is rural, and we learned about the many challenges faced by families.”

Understanding the difficulties its families were facing, the First Class Pre-K staff realized that virtual-only pre-k was a struggle for many of Alabama’s families; parents needed more hands-on, old-school materials.

So in April, they put together early childhood education backpacks full of materials specifically designed to support teaching and learning for 4-year-old children. First Class Pre-K monitors, region directors and coaches hand-delivered the backpacks with crayons, chalk, Play-Doh, glue and other materials to nearly 20,000 of Alabama’s 4-year-olds.

The sensitivity and data-driven readiness of that response is completely in character for this nationally recognized program that consistently sets the standard for high-quality pre-K programs.

In fact, for 14 consecutive years, the National Institute for Early Education Research (NIEER) has ranked the First Class Pre-K program, which is managed by the Alabama Department of Early Childhood Education, as one of the top quality programs in the USA. From its beginning with eight classrooms in 2001, the program has grown to 1,239 classrooms serving more than 21,000 of Alabama’s 4-year-olds. Its continuous top NIEER ranking shows that this expansion has taken place without any reduction in quality.

Despite a high level of support from the state, the program still has waiting lists in some parts of the state—a situation Cooper and her team are determined to remedy by continuing to expand the number of classrooms as increases in state funding are approved.

The First Class Pre-K program is free for most children and completely voluntary. According to Cooper, the tipping point will be reached when the program is available to 70 percent of the state’s 4-year-old children.

The program’s mission is to ensure the state’s 4-year-olds arrive at kindergarten ready to learn. What’s “ready to learn”? Alabama’s Office of School Readiness defines kindergarten-ready as children having an enthusiasm for learning, the ability to function in a social setting, the ability to solve problems, and the skills to communicate in an age-appropriate way. Numerous studies identify these skills as foundational for a child’s later success in school and life.

Though the program’s curriculum is directed to the educational needs of 4-year-olds, its two-generation approach focuses on parents as the child’s first teachers by providing them with the coaching, support and materials they need to flourish in that role.

The program is sustained primarily by funding the Alabama Legislature appropriated through the state’s Education Trust Fund and is supplemented through a variety of state and federal grants and public/private partnerships. Competition for state funding is fierce, as in most states, but because the Alabama First Class Pre-K program has been so strongly focused on continuous quality improvement and has the data to prove it, the program has had bipartisan support and has seen its funding increase from less than $1 million in 2001 to the current appropriation of $128 million.

The program’s structure creates a two-way flow of information from the state administration to front-line providers as well as from providers to the top tier of administration. Each of the state’s eight regions has a director who supports the First Class coaches who provide job-embedded support and training for the teachers, and monitors who go into the First Class Pre-K programs and other birth-to-5 programs to ensure all the indicators of quality are being met.

“We have a multidisciplinary research and evaluation team led by researchers from the University of Alabama-Birmingham School of Public Health that meets once a month,” Cooper says. “We evaluate everything through an equity lens. We look at the data and are constantly gauging our effectiveness in both process and outcomes, and if improvement is required, we respond with urgency.”

The program has the full support of Gov. Kay Ivey, whose Strong Start, Strong Finish Education Initiative is an expression of the commitment Alabama has made to improve the lives and education of its children, and to ensure that the state will have a workforce that’s prepared to meet the educational and technical challenges of the future.

👉 Read our 5 Questions for the Governor with Kay Ivey.

The Alabama Department of Early Childhood Education (ADECE)—one of a handful of cabinet-level state departments devoted to early childhood—is an essential foundation for that ambitious goal. Successful pre-K programs teach children how to be learners and to develop the executive functioning skills they need to thrive in a classroom—a particular challenge when so much learning has moved online. The First Class Pre-K program doesn’t expect the little ones to sit in a Zoom classroom for hours, but it does work with the parents to help their children learn the essentials.

The program has a diverse delivery system with classrooms located in public schools, Head Start centers, public and private pre-schools, faith-based centers and other child care facilities that apply for grants to deliver the program. The organizations that are funded are required to follow First Class Pre-K Guidelines and meet the Alabama Standards for Early Learning and Development (ASELD).

The state also offers an array of resources for all involved in early childhood education—providers, educators and families. Alabama Family Central is a “one-stop shop” online clearinghouse that provides links and information from all available state and local agencies as well as a host of resources related to the health and wellbeing of Alabama’s children and families. The site offers COVID-19-related information for families and educators, as well as information on virtual learning, vaccine programs and help lines for parents needing advice. Cooper says additional resources are being added weekly.

In January, Gov. Ivey announced the launch of Born Ready, a statewide multimedia campaign that uses brain-development research and focus group data to raise awareness among Alabama’s parents of the importance of early childhood learning experiences and the essential role parents play in assuring their child reaches their greatest potential.

ADECE research indicated that many parents weren’t aware of the impact of the critical window for brain development from birth to age 5—or felt inadequate to do anything on their own. Born Ready offers information to inspire and support parents, including customized Vroom tips that help parents include brain-building activities in their daily interactions with their children. Parents are asked to sign a Born-Ready Pledge acknowledging that their child was born ready to learn and they are born ready to be their child’s first teacher.

“We started the Born Ready campaign just before the pandemic,” Cooper says, “so we were already working to help parents understand that they can do so much of what their child needs right at home. (After the pandemic hit) we sent parents tips and challenges every day, with ideas about what they could do to excite their children about learning and to continue to build on their desire to learn.”

Building on that success, Alabama is piloting the First Class Foundations program, funded through the state’s federal Preschool Development Birth to 5 Grant. The program will follow the same model as the First Class Pre-K program, with coaches providing support and training for the birth-to-3 teachers and leadership development for program directors.

“We’re working toward pay parity, which is almost unheard of in the child care world,” Cooper says. “Some of the funds will be used to move toward paying teachers wages consistent with recognized professions for working with children in those critical years. Paying teachers as the professionals they are, as well as providing them with high-quality professional development, are critical tools in attracting and retaining a professional workforce.

“We know there traditionally has not been investment in those working with children in early-care settings, and we are laser-focused on retaining the highest-quality educators and providers for our youngest learners.”

Alabama Partnership for Children – The Alabama Partnership for Children (APC) is a 501(c)3 non-profit public/private partnership created to develop, design, and implement a unified approach for improving outcomes of children from birth to age five in Alabama. The APC is guided by prominent business leaders committed to enhancing the quality of life and quality of learning for children birth to five years in Alabama.

Alabama Family Central – A “one-stop shop” online clearinghouse that provides links and information available from state and local resources related to the health and wellbeing of children. Additional resources being added weekly .

Born Ready – Born Ready is an initiative from the Alabama Department of Early Childhood Education (ADECE) focused on raising awareness among Alabama parents of the importance of early brain development and high-quality early care and education. The mission of ADECE is to inspire and support parents and caregivers in the knowledge that they are their child’s first teacher.

Vroom – Vroom is a set of tools and resources from the Bezos Family Foundation designed to inspire families to turn everyday experiences into “brain-building moments” by layering activities that are essential to healthy brain development onto existing routines. This information is included in the tips and activities for parents and children that are shared on the Born Ready platform.